Get to Know the Owners of Garage Living of Denver

One of our newest franchises is Garage Living of Denver, which is owned by Binh Truong and his wife, Tu Kim Le.

Garage Living of Denver is our first franchise owned and operated by Veterans. It opened earlier this year and won the Best In Show award at the Denver Home Show in March.

We thought Binh and Tu’s story was worth sharing and they sat down with us recently for an interview.

Tell me a little about your family, Binh.

I’ve been married to Tu now for 19 years. We’re pretty much high school sweethearts. We have a really busy lifestyle and everything is focussed on the kids. Having a close-knit family is really important to us.

Were you born and raised in Denver?

I’m originally from Virginia Beach. I was there until I was about 15 and that’s when I moved to Colorado.

Tu, can you give me some background on yourself?

I came to Colorado from Vietnam when I was 12. I’m a CFO (Chief Financial Officer) for a sporting goods company and pretty much handle everything for the company, from financials to HR to inventories.

So both of you are going to be running Garage Living of Denver together and Tu, you’ll continue with the sporting goods company??

Binh, looking at your wife’s business experience, did that inspire you to take on the challenge of having a franchise as well?

Yes, absolutely. In October or November of 2016, we went to the Denver franchise show and just wanted to see what was out there and we bought the sporting goods franchise.

The reason we bought that was because we couldn’t do this (Garage Living of Denver) because I was deploying in a week. I saw the Garage Living franchise at the show and thought it was right up my alley and perfect.

Tell me about the deployment. It’s a fascinating story, with you having four kids and having to go overseas.

Tu: Well we didn’t have four when he left. (both laugh)

Binh: It was tough and unexpected because my unit knew that I was having a child. I found out a little before the birth of my son and I said “You’re kidding me, right? Can you get the other guys to go?” They said “No, you have to go. We need the best guy in Colorado and you’re the best guy in the state.”

What was your job in the military?

I’m in satellite communications and there’s only four other people in the state that can do it. I’m part of a field artillery team and in order for you to shoot big artillery and rockets, you have to be able to talk. My part is to make sure everybody can talk so that we can carry out the missions.

Obviously, I couldn’t say no and hey, I have to go eventually. This is what I signed up for and it’s never a good time to deploy. I sat down with the wife and told her and that was really tough.

How long was your deployment?

The total process took a year. I spent a little over nine months in-country, including being in Texas for about two months. Then I was shipped out overseas on December 31st, 2016, before the birth of my son.

As much as you’re able to, can you share anything about what you experienced overseas?

Working in silent communications as part of the field artillery, we launched surface-to-surface missiles and it was in support of Operation Air Resolve.

I was also in Dubai for awhile for Operation Spartan Shield. I did a lot of travelling…Iraq, Kuwait, Quatar, also a lot of work in the U.A.E. (United Arab Emirates) and just making sure systems are set up so people can talk. 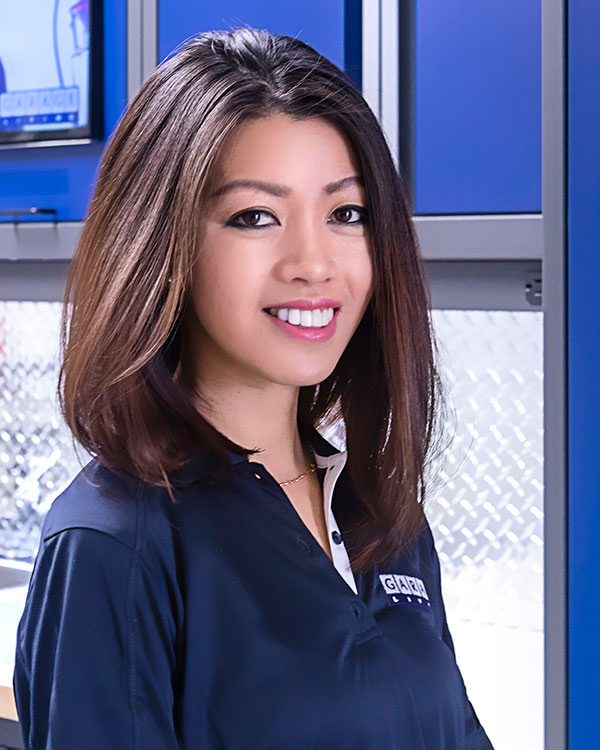 Why was it important for you to serve your country by initially enlisting in the Colorado National Guard?

I grew up in a bit of a torn family. I didn’t live with my dad or my mom, I lived with one of my grandparents. Then I moved to Colorado and met Tu.

I never did very well in school, but I’ve always been good with sales. When I was 18, I worked at a rental car agency and then migrated into car sales. I just kept moving on from there and also got into finance a little bit.

Then we had kids. The car business was kind of turning me into a shell of a person because of the difficult hours. You have split days off, long days, and on some of your days off you’d still have to come in because one of your customers was there. That’s just how it works.

Tu was starting to build her path and really see what she wants to do for a living. We sat down and talked and I said “I want to do something that really means something for my kids.”

That’s the big reason why I joined the military, for the opportunities and so my kids could be proud of their daddy. You really do have a lot of opportunity in the United States.

How would you say your military experience changed you?

It absolutely did. Joining the military, it really gives you another idea of what family can feel like. Yes, I have my immediate family, but I never had anything before like a real brother or sister…someone I can call if I need something and they’re there.

Sometimes family can’t do a few things, but I can always pick up that phone and call a guy and without hesitation it’s “okay”. It’s about the camaraderie and it definitely helps you with structure. I don’t think you can get that any better than from joining the military.

Having been back for a little while, you must miss that camaraderie?

Absolutely. Nothing’s going to trump family, but I miss being around them. You live with guys for nine months in a tent and you need a lot of support from those guys.

You’re outside digging trenches to lay cables, or doing other jobs that might seem like the most ridiculous things that make no sense. You’re chosen to do it and the guy next to you says “Man, I’ll go do it with you”, just so you can “embrace the suck” together, as we would say.

So yes, I do miss that. The missions that we did over there made a huge difference. It was nice, but being back home is a little nicer.

Tell me about making arrangements to start Garage Living of Denver while you were still deployed.

When I was overseas, Tu called me when I had about four or five months left in the deployment and she said “We have to start working on this other franchise.” I said “Are you nuts? We just got the other franchise!”

And then we started having satellite phone calls with Steve Wilkins (Garage Living Vice President of Franchise Development) and Aaron Cash (managing partner of Garage Living) to talk more about the opportunity.

We’ve always wanted to own some type of a business and thought bigger than just working for somebody. The other franchise caught our eye because that’s something Tu can do easily. It’s very part-time and it’s really a lot of fun for her.

And I wanted to do something that I enjoyed. I’ve always been into cars and I love to build, so Garage Living was perfect.

What else about Garage Living specifically were you drawn to?

It was appealing seeing some of Garage Living’s pictures and how the garages they’ve done looked so cool. I was also thinking about all the construction that’s going on in Colorado right now, but it’s focussed more on kitchens, bathrooms, and flooring.

I thought those areas were too saturated, but another specialized trade like garage improvement would be a good fit. It has a little bit of everything I want to do. 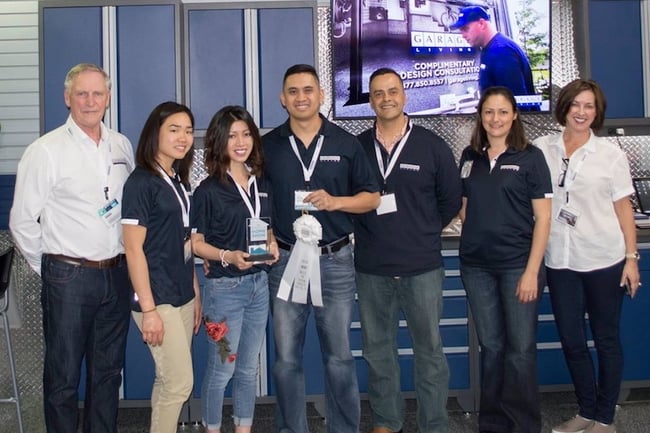 The Garage Living of Denver team won the Best In Show award at the Denver Home Show earlier this year.

You also have a background in contracting. Tell me about that and how it will help you with Garage Living of Denver.

While I was working in car sales, I would also work on and off for a friend who owned a small contracting company. He would flip homes and there were always projects to work on. That’s how I learned how to do everything, just from doing quite a bit of construction.

In 2011, after I had joined the military and been gone for a year, we bought a small home. I completely gutted it and then built it all the way up.

I love building and that experience will be helpful with the garage projects we’ll be handling.

You mentioned that there’s a lot of home building going on in Colorado right now?

There’s a lot of things going on. The growth of the market and population in the last six years in Colorado is ridiculous. Traffic never used to be an issue and now it’s stop and go.

Home prices have risen dramatically and people can’t move out of these homes because they cost too much. So what do they do? They remodel and renovate, so I thought “Garage Living”. The company specializes in working on high-end homes and that’s what I want to do.

Other than your love of cars, what are some of your other hobbies?

I love the outdoors…camping and fishing. We’ve got a camper and we’ll head up to the mountains. My kids do enjoy that one hobby with me. Well, my girls do. (laughs) My girls love to fish.

My son is kind of a geek and he gets that from me. He’s into hands-on things, like tearing stuff apart and putting them back together. He loves things like electronics and science. I’m hoping that grows into an interest in vehicles and tinkering and building with them.