Why the Garage Is Becoming the New Dream Living Room

Many homeowners are turning garages into extra rooms to get a little more space in their homes. In many places around the world, the eco-conscious are trying to rely more heavily on public and sustainable transit, and garages are being used less and less. Turning a garage into a livable space is a great way to prevent it from becoming a drop zone for all of your unused possessions.

Following this trend, some creative architects and designers are embracing the garage aesthetic and introducing some of the aspects of a garage into a more traditional space. Exposed brick and concrete have been popular in interior design for years, but now a new trend has emerged: using garage doors as windows in living rooms and other interior spaces.

This new trend isn’t only a space-saving option; it allows for a flood of natural light that increases both the curb appeal of the house as well as the resale value.

There are plenty of doors to choose from, but making the additional investment of an insulated door is suggested if you intend to use it in a non-traditional way. This will not only keep your home warmer (or cooler, depending on the season), but will help to mitigate noise from outside. 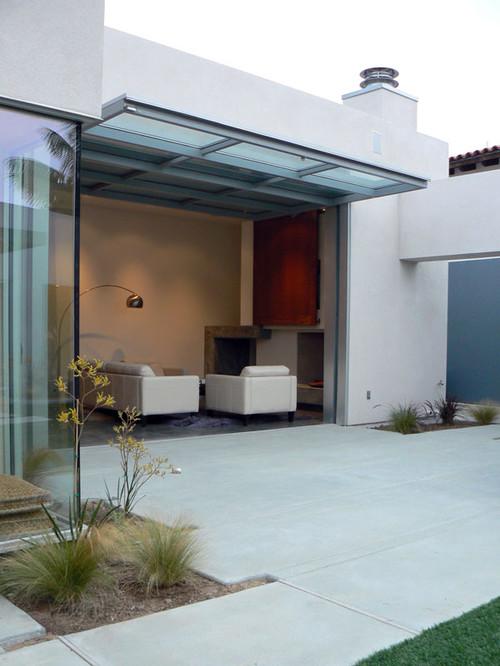 These doors tilt outward then lift up and, when open, will align with the ceiling. This swing-out feature requires extra space outside for clearance, but the panel provides a small awning above the opening. This is a useful feature if you’re not interested in direct sunlight, or if you want to open the door for fresh air during light rain.

These doors feature panels that lift straight up rather than folding into the interior space. They are best used in double-height areas and are great for saving both interior and exterior space. Airflow in double height spaces can often be a challenge with the top area becoming stuffy and hot while the bottom area remains cool, but garage doors are a great way of opening up the room in a way that creates lots of circulation. 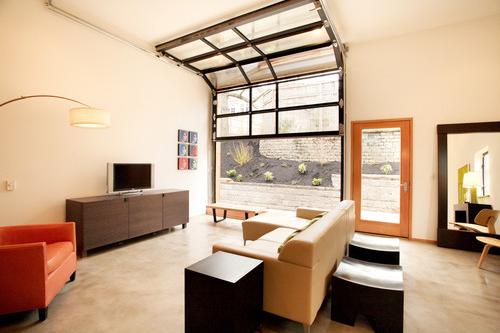 The most common type of garage door, these doors are constructed of panels that slide up overhead. They have two advantages over other styles:

Although the traditional association with garage doors are for function, nor for fashion, this new trend is breaking the mold and is allowing home owners to see these pieces in a new and exciting way.